The book chapter “Public Spaces and Alternative Media Practices in Europe. The Case of the EuroMayDay Parade Against Precarity”, that I co-authored with Nicole Doerr has just been published in the edited volume “Media And Revolt: Strategies and Performances from the 1960s to the Present”. 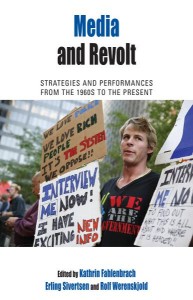 This is the beginning of the intro to the book chapter:

“This chapter deals with the role of emerging transnational public spaces for communication and collective identification in contemporary social movement groups in different European countries and at the transnational level of European Union (EU) politics. Related to globalization, European integration, and the increasing use of internet communication technologies (ICTs) by activists, national public spaces in the twenty-seven member states of the EU pass through a process of transformation that might deeply redefine democratic and participation practices. In this chapter, we discuss the emergence of a loose critical Europeanist collective identity1 revolving around the political concept of “precarity” and linked to the organization of a transnational protest campaign, the EuroMayDay Parade (EMP), against precarious and insecure work.2 In particular, we focus on how collective identification processes were discursively constructed in the protest campaign through the elaboration of alternative media practices toward the transnational European level. Activists constructed “parallel discursive arenas” (Fraser 1992: 123) in which the feeling of being European precarious workers found a potential space of expression and consolidation. Though these arenas were and still are fragile and temporary, they show how important alternative media practices and the resulting independent spaces of communication are for the emergence of critical Europeanist collective identities. In doing this, we offer important insights related to the existence of the so-called public deficit of the European Union, including the lack of truly European mainstream media. It also suggests that scholars interested in the emergence of European public spheres might look not only at the mainstream media, but also at more grassroots forms of mediation and communication.”